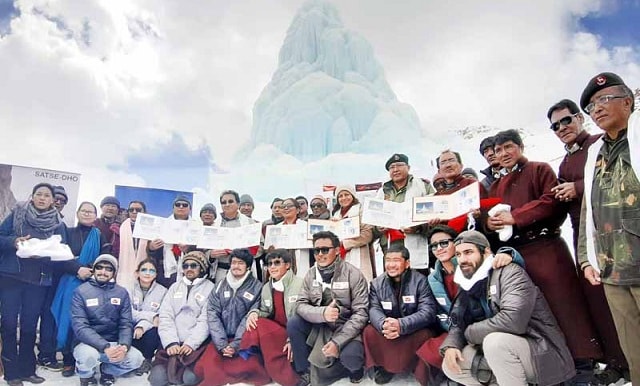 A special stamp cover was released by India Post on the Ice Stupa in Leh. This was at an event by the Chief Postmaster General of Jammu & Kashmir Circle on March 18, 2019. The event also witnessed the presence of Sonam Wangchuk, who is the founding member of Himalayan Institute of Alternatives, Ladakh.

The discovery was made during the 28th edition of the annual ‘Caving in the Abode of the Clouds Expedition’ that took place between February 3 and 28, 2019. During a survey of world’s longest sandstone cave Krem Puri in Mawsynram region of Meghalaya’s East Khasi Hills district, a cave with the deepest shaft in the country was discovered. Located on the valley floor, the Krem Um Ladaw cave has a 105m deep shaft entrance passage.

A Shark Plane at Delhi Airport

A shark-themed plane landed in Delhi on March 20, 2019. The shark-themed Embraer E190-E2 is a commercial jet, the design of which gives a spacious, wide-bodied aircraft feel. Delhi Airport tweeted around 4.48 pm the same day, "E190-E2 aka Shark. You look wildly impressive in our backyard!". E190-E2 is manufactured by Brazilian aircraft manufacturer Embraer.