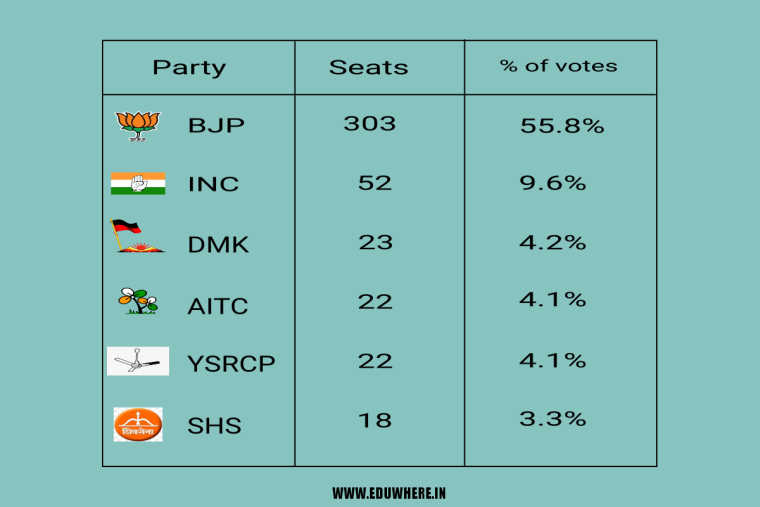 The country has done the job and made a decision that would decide the future for the next 5 years.

Not just India but various countries around the world are considering Indian elections as an example to learn. From all the 542 seats throughout the country, here is an overview for the Lok Sabha elections seats by the top 6 parties:

Bharatiya Janata Party is a clear winner with 303 seats that makes 55.8% of the complete polls.

Indian National Congress had many expectations for this Lok Sabha polls but it didn’t work out much for the majority. INC has acquired 52 seats with 9.2% of the total polls.

Dravida Munnetra Kazhagam, from Tamil Nadu and Union Territory of Puducherry, managed to get 23 seats. This Dravidian Party managed to get 4.2% of the polls.

All India Trinamool Congress founded by Mamata Banerjee acquired 4.1% seats with a number of 22 amongst the total.

YSR Congress Party is a regional political party in the states of Andhra Pradesh and Telangana in India. It has won 22 seats overall with 4.1%. Jagan Mohan Reddy shall be the Chief Minister.

Shiv Sena from Maharashtra managed to get 18 seats with 3.3%.