Not goofing up GK in CLAT 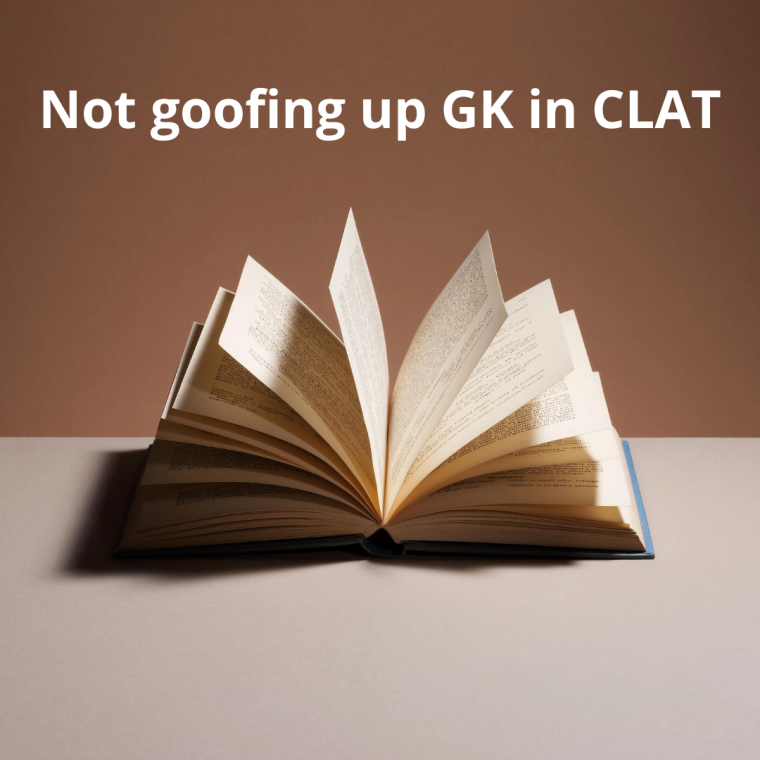 This article isn’t about motivating anyone. I really don’t feel like I am a motivator. Neither am I amotivational speaker (well, I hate that job-title).

Nor is this article going to be about the career options that are available after Law and why you should appear for CLAT.

You may choose up to be a corporate lawyer, a journalist, work for an NGO or do something else.

Irrespective of the life choice you make, the one thing that is common to the aforementioned choices, is the fact that you’ve to work hard. Really hard!

And this post is going to be exactly about that. And also about how should one go about their preparation for GK.

The ability to work hard and the skill to take in disappointments and return to the battleground isthe most quintessential thing for your preparation for CLAT Exam.

You may be talented. You may have a photographic memory. You may be the best in your school.

But, if you don’t work hard, you will soon be no one.

Rahul Dravid was one of the greatest players to have played the game of cricket. The reason why Dravid was a great batsmen lay in the fact that he worked on preserving his talent, on honing his skills that would help him make it productive.

On the other hand, Michael Jordan, a highly talented Basketball player, was cut off from his team in the initial years by the coach because he wasn’t putting in much hard work. But, he soon became the hardest working basketball player and the rest is history.

Same is the case with each of us.

No matter who we are, howsoever talented we might be, if we don’t practice enough (working hard = practicing), we are surely going to fail on the match day.

And remember, its not just CLAT that you are aiming for.

Your life has not been reduced to clearing CLAT. It is more than that. And this is the main reason why you should work hard.

Regardless of the fact that whether you get a good college or not, if you have worked hardtowards CLAT Preparation, you will not regret that you could not clear the exam.

And believe me, it is really the effort that counts. You might not be able to make it to a National Law School, but a few years down the line, you will surely benefit from this habit of working hard.

One exam cannot determine your life, but the fact that you can work hard will surely do.

Remembering the number ‘1’ would help us be better at GK.

Learning from ‘1’ book would help in getting a good score in CLAT.

Going through that ‘1’ book numerous times is the ultimate key, instead of looking at numerous sources.

Reading that ‘1’ newspaper every day and ‘1’ current affairs magazine every month would suffice the preparation.

But how exactly would anyone remember so many things at once?

Well, you’re not supposed to remember everything… because no sane person can remember each and every word of Pearson [or Lucent], even in a lifetime.

So, how would one do it?

• Firstly, GK, as a subject for an objective paper is majorly about good guessing that involveslogical thinking. Logical guessing and not random guessing is the key. And, this logical guessingcomes only having an overview of all the topics. Thus, finishing the entire book once is a must.The second ideal step is to attempt objective questions from that topic. Your rank is inverselyproportional to the number of questions you attempt. Thus attempt as many questions as possible.

• Secondly, you can only remember if you revise the parts again and again. Like Dravid, one has towork on honing the skills that one has acquired.

• Thirdly, connect the two parts of GK. Never read the two in isolation. Also, a general trend of theexam setters has been to involve those static GK questions in the exam, which are in a wayrelated to the current affairs. So, it is of utmost importance to connect the two threads. Generallyalso, connect the previously read stuff to the present readings. For instance, if you read about aparticular state, try thinking about the capital of the state, the CM of the state. Think of the newschemes that started in the state. Think of the major events that happened in that state. Justconnect the things. Make Mind Maps [Courtesy- Sherlock’s Mind Castle]

• Fourthly, do all the previous year questions to get a brief idea of the questions that are asked andstudy in the same fashion and think from the perspective of an exam-setter.

• Fifthly, in this age of technology, using technology to our advantage is the key to success.Stayingcurious would solve major GK Problems.Google the concept/word that you don’t understand. Ortry reading more about the event that you read about in the newspaper. Also, another constructiveuse of technology can be to use your mobile phone to record yourself, while doing GK andlistening to it in your free time or while you’re commuting [Courtesy:- Dexter’s Laboratory Omelette du Fromage].

• In addition to the LawPrep Tutorials modules, the following  CLAT Preparation books are necessary:-Books – Either Lucent or Pearson [Both are equally good]Magazines- News and Events [Very handy for revision]Websites- Either GK Today or Jagran Josh [Both are equally good]Newspapers- Either Hindu or The Indian Express [Notwithstanding what people say, Hindu is notthe only newspaper as you don’t have to appear for Civils]

Most importantly, just follow ‘1’ source of information and revise that many times, instead oflearning from 10 sources and not finishing even 1 of them.

Remember, poor scores in a mock doesn’t show that you can’t do it, rather it reflects that you didn’t practice much. And if you did, but still did not get the desired result, you won’t have anything to regret for.